The Story of the Lake by InKo Centre, Company Young, a Korean folk tale, at the Little Festival 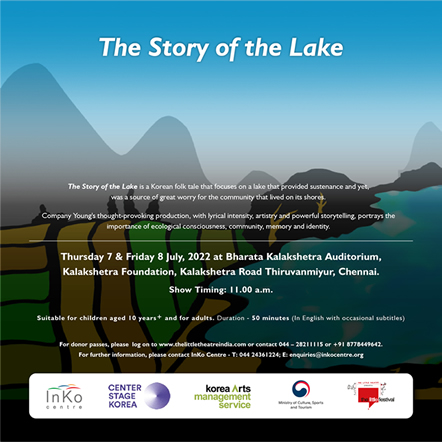 InKo Centre is delighted to co-present The Story of the Lake by Company Young, a Korean folk tale, at the Little Festival on 7 and 8 July 2022 at 11:00 am at the Bharata Kalakshetra Auditorium, Chennai in association with the Little Festival.

The following is the show timing:

Suitable for children aged 10 years + and for adults.

Language: In English with occasional subsitles.

The Story of the Lake is a Korean folk tale that focuses on a lake that provided sustenance and yet, was a source of great worry for the community that lived on its shores. The latter, was due to the fact that the lake often breached the dam that the community built around it, flooding the village and causing great damage to both life and livelihoods. Every time the dam was breached, the villagers painstakingly re-built it at a great cost. One day a monk who was passing by, suggested that a child had to be sacrificed to prevent the dam from repeatedly breaking down. Accordingly, a child called Dae-su was selected as a sacrificial offer. Legend has it that the sacrifice stemmed the tide and that the dam never breached its walls thereafter. In memory of this great sacrifice, the lake was named Dae-su, meaning ‘big water’. The grateful villagers continued to celebrate the child’s mindful act that provided them and future generations with the life-saving resource of water and saved them from catastrophic destruction. According to the folktale, the recurrent breaching of the dam began after the Black Giant fell into the lake after losing a battle with the Sky Giant. The Sky Giant manifests himself as the monk who orders the sacrifice of the boy. With this sacrifice he defeats the Black Giant and completely quells his evil intentions. The monk later brings back to life the young boy who was sacrificed and returns him to his grateful parents. What was the significance of this seemingly devastating sacrifice? Did it symbolically mean that only innocence and purity can save both environment and people? That only by giving up what is dearest to us, can we recognise the value of life and all that Nature has given us? That Nature, like an innocent child must be valued, cherished and nurtured? And that if disrespected, will demand a costly sacrifice of what we hold dearest?

Note from Director, Ko Jae-Kyung Most people exist due to their social roles or needs for the existence of others and groups. However, I think people still have their own existential values. In my opinion, understanding how precious we and others are and sharing empathy through understanding, those values are most important in our lives. The Story of the Lake is a play illustrating those values, even though it is not a participatory play. Through the show, I hope the audience, including children and adults, become happy, share their affection and a common love for humanity.

The Little Festival is an annual Festival for children held in July in the city of Chennai in South India.  It is organised by The Little Theatre which is a theatre dedicated to providing wholesome theatre to children and young adults.  The company has been presenting a Christmas pantomime annually in December for approximately 15 years.  The Little Festival is now into its seventh year and presents the company’s own production, as well as plays by international companies for children and family audiences.  We have presented Theatre Seoul’s Choon Hyang and Heungbu Nolbu, Taroo’s TheTiger with White Eyebrows, Puppet Fantasy Hooray by Manetsangsahwa, The Dandelion’s Story by Modl Theatre and Woogie Boogie by Theatre Brush at the Little Theatre Festival, Chennai.

We hope, as we resume presentations in physical auditoria, to bring back the magic of live theatre that we so missed over the last two years!