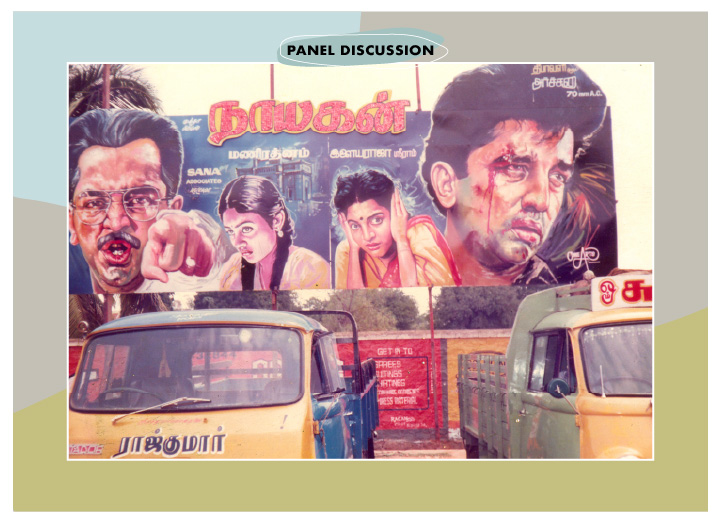 Pictures and Paintings –the glory of Madras!

Cinema and visual art went hand in hand in the Madras skyline.

Painted walls of the Binny factory in North Madras, Cloth banners fluttering along the banks of the Cooum, Canvas paintings outside every theatre in the city, posters of the classic scenes, Laminated Plastic photo boards on the backs of Pallavan buses, and huge billboards featuring the entire cast of a film, life size cut-outs of our favourite heroes and hand painted hoardings that dotted the stretch between Safire and Casino on Mount road was a veritable feast to the senses.

Join us as an eminent panel delves into this phenomenon/ heritage/history that marked a symbiosis between cinema, pictures and visual art to celebrate Madras month at the Chennai Photo Biennale August Line up of events.

V.Jeevananthan is the elder son of N.Velayutham, a famous artist and the proprietor of Cine Arts established in 1954. He is the President of Chitrakala Academy, An association for Artists in Coimbatore. He has been a Cinema Banner Artist and painted thousands of giant banners, an art which is extinct now. Jeeva Nanthan has been exhibiting his paintings since 1979 in all Chithrakala Academy Annual Art Exhibitions at Coimbatore, Chennai and Bangalore. He has been selected as one of the 133 painters from all over India to paint Kuraloviyam exhibited since 2000, at the unveiling of Valluvar Statue at Kanyakumari.

During the 1980s, he wrote cinema reviews in the famous magazine ‘Kalki’ as a student writer. He was a student artist in ‘Dhisaigal’ a youth magazine edited by ‘Maalan’ during the 80s with director Vasanth, Jayanthasri Blalakrishnan and Marshal.

In 2010, his book ‘Thiraicheelai’ won the National film awards for one of the best books on cinema.

Preminda Jacob is Associate Dean and Associate Professor at the University of Maryland Baltimore County, USA. Her areas of teaching and research focus on modern and contemporary art history and theory, the visual culture of Indian films, and public art and urbanism. Her work documents and theorizes ephemeral art forms that animate the everyday, public spaces of post-colonial cities in South Asia. Dr. Jacob has published numerous articles, book chapters and a book, Celluloid Deities: The Visual Culture of Cinema and Politics in South India (Lexington Books, Rowman and Littlefield, 2009 and Orient Blackswan, India 2010). Dr. Jacob earned her BA from Stella Maris College, Chennai, India, her MA in Art Criticism from Maharaja Sayaji Rao University, Vadodara, India, her MA in Art History from Binghamton University, and her PhD in Art History from the University of California, Los Angeles.

Rajiv has worked with top directors such as Mani Ratnam, Girish Karnad, Shyam Benegal, among others, in his long career. His cinematography for Mani Ratnam’s Guru won him the Apsara Award and the Shantaram award while Tamil feature film Kadal, also by Mani Ratnam, got him the Filmfare award for the best cinematographer. Rajiv was also the cinematographer for Girish Karnad’s Hindi feature film Chelluvi and has also worked on several documentaries for international TV networks with renowned director Shyam Benegal. In 1984, he was sent by Prasad Studios to the US to train under cinematographer Garret Brown, best known for his invention of the Steadicam.

Rajiv’s skills as an accomplished cameraman were honed in his long career as an ad film-maker of repute. In 1986, Rajiv founded the eponymous Rajiv Menon Productions (RMP) and began producing TV commercials for several big brands.

Rajiv’s deep understanding of cinema and his technical excellence as a cinematographer saw him direct a blockbuster movie in 1995, Minsara Kanuvu, produced by the legendary AVM Studios. Dubbed as Sapnay in Hindi, the film in Tamil won four national awards – for choreography, male and female playback, singing and best music director.

In 2000, Rajiv directed yet another blockbuster, Kandukondain Kandukondain, which won the Filmfare award that year for best film and best director. It also won a national award for best male playback singer.

He directed his third film Sarvam Thaalamayam, under Mindscreen Cinemas produced by Latha. The film was well received on its release and it was screened in Tokyo International Film Festival 2018, Shanghai film festival 2019 and Jecheon international film festival.

Theodore Baskaran did his post graduation in History in Madras Christian College. He has published many books and his notable works are ‘The Message Bearers: The Nationalist Politics and the Entertainment Media in South India, 1880-1945’ (1981) and The Eye of the Serpent: An Introduction to Tamil Cinema (1996) which won the National award for the Best Book on Cinema.

He also writes for many Tamil magazines on cinema. Baskaran has been a member of the Advisory Board of National Film Archives, Pune. In 2002 he taught a course on Tamil Cinema in the University of Michigan. In 2003 he was on the jury for National film awards.

Uma Vangal wears many hats – Filmmaker, Film professor, Film curator, Film historian, Columnist,TedX speaker & Life Coach. She specialises in South Asian & Tamil Cinema, Film & Gender Studies and is authoring books on ‘The Fitmus Test – how to read a film from a woman’s perspective’ and ‘Collaborations beyond borders to reach global audiences’. She is currently a faculty at LV Prasad Film Academy, Chennai and a Fulbright scholar at the Brooklyn College, CUNY, New York.

Please note: If you are unable to join the panel on Zoom due to full capacity, please join our Facebook Live: https://www.facebook.com/ChennaiPhotoBiennale/live/